The Wednesday Meetings organized by The Institute of Art History “G. Oprescu”:

Olivia Nitis, Irina Carabas, “About editing and publishing the volume “After Brancusi”, April 29, 2015

Virginia Barbu: Out of the correspondence of Barbu Brezianu

RuxandaBeldiman: Pages of history of Institute’s Department of modern art (BarbuBrezianu’s activity within the Institute)

Conference of the project “The Saint of Montparnasse” from Document to Myth. A Century of Constantin Brancusi Scholarship.

Period: 4th-6th October 2013
Organizer: Institute of Art History “G.Oprescu” of the Romanian Academy in partnership with the National University of Arts, Bucharest


After having experienced the shock of modernity, sculpture has not held a steady definition. Its status within the contemporary art system is highly divided and challenged today. “What is sculpture?” More than ever, this question does not meet an unequivocal answer. In spite of the seemingly endless process of transformations underwent by sculpture, Constantin Brancusi and his work have continued to rise interest among scholars and to pervade the imagination of artists.
The history of sculpture of the 20th century retains Brancusi as one of its leading heroes due to the unforeseen openings that his art production has made available for his posterity. The Institute of Art History in Bucharest had the honor of receiving in 2008 the donation of the art historian Barbu Brezianu, a distinguished scholar of Brancusi’s work.

This donation consists in his art library, centered primarily on 20th century sculpture, more than three hundred documentary files, and a rich correspondence with numerous foreign and Romanian art historians. This valuable archive is being now organized and researched due to a project funded by the National Research Council. The conference of the project will examine the effects of Brancusi’s work on modern and contemporary sculpture/discourse on sculpture as well as strategies, approaches, debates that underpin its status during the 20th and 21st centuries.

Documentary trip to Paris by Virginia Barbu, Ruxanda Beldiman and Corina Teacă. Researches and inquiries were made in the following institutions: Musée National d’art Moderne – Centre Georges Pompidou; Musée Gustave Moreau, Musée de l’Orangerie, Musée de la vie romantique; the Brâncuşi archives at the Biblioteque Kandinsky containing part of Brâncuşi’s correspondence to the intellectual milieu he attended, his friendships, his connections to art collectors, the exhibitions  etc; the Bourdelle archive at the Musée Bourdelle, especially the letters addressed tot Bourdelle, the French sculptor, by his Romanian  admirers, among them Anastase Simu the museum founder, or his Romanian pupils. 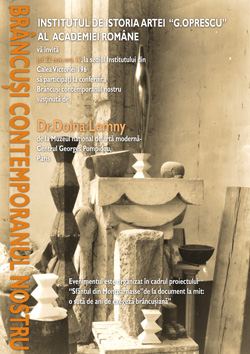 Irina Cărăbaş, „The Wooden Avant-Garde ad the Reception of Brancusi in Romania”, paper presented at the third conference of the European Network for Avant-Garde and Modernism Studies (EAM), Material Meanings. Also at the same conference, Irina Cărăbaş was chairman of a panel discussing conditions and forms of existence of the Avant-Garde in the 1960 in Romania („Elusive Avant-Garde. Materials, Practices, Connections in Post-War Romania”) http://www.kent.ac.uk/english/materialmeanins

Meeting with professionals in documenting and archiving from the National Museum of Contemporary Art (Adriana Oprea, Magda Predescu) and from the Institute of Art history “G. Oprescu (Maria Anghelescu, Marina Aposteanu, Antoaneta Alexandru) in order to analyze solutions on archive organizing for the archive of art historian Barbu Brezeanu. There were also discussions on the method to use and also given examples for similar archives kept in important institutions from France and the USA (the archive of the art historian Ionel Jianou, of the Archives de l’art contemporain de Rennes and the Sidney Geist archive at the MOMA Museum of Modern Art in New York, both among Barbu Breazianu’s correspondents).

Public presentation of the project in presence of the director of the Institute and most of the researchers. The project director and some members of the team presented the main goals, as well as their individual tasks.